The following are what I would consider to be the best field guides available on the fungi of Great Britain & Europe.  Some of these guides are now out of print but they can be picked up in good condition, second hand.  Some of the names of the species in these books will have changed but the new names can easily be found online.  Generally within these books, the quality of either the photographs or illustrations, in combination with very informative text, far out weighs the change of a name.

Bon, M. (1987)The Mushrooms and Toadstools of Britain and North-western Europe. Hodder & Stoughton. 352 pp.    Illustrations.  Out of print. Great illustrations and descriptive text.  This was my first Field Guide, one that I could carry and use in the field. Ok, it doesn’t have as many species as the Courtecuisse or the latest Collins Buczacki books below, but as a complete guide, it beats both of them. Should be able to pick up a copy on Abe books.  There has been an update to this guide in recent years which has been published in every other european language apart from in English?  People are still waiting for pre-orders of this supposedly planned new English edition from years back to be realised, so just go for the original edition.

Courtecuisse, R. & Duhem, B. 1995. Mushroom & Toadstools of Britain and Europe. HarperCollins.  Illustrations. Out of print.  Great illustrations which could do with more descriptive text.  A lot of the descriptive text is hidden in the extended, dichotomous keys.  Still a great, just about pocket sized, Field Guide.  Abe books do have reasonably priced copies of this otherwise rare field guide, well worth looking out for and purchasing if available.  I’ve seen it between £5-6 plus postage, a very good deal. 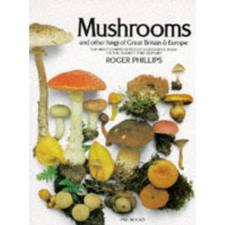 Phillips, R. (1981). Mushrooms and other fungi of Great Britain & Europe. London: Pan Books. 288 pp. Photographs. Larger Format.  Out of print.  A standard and the better of the two formats, although many names have changed and are updated in the smaller, newer edition.  Can be got second hand, although it can be fairly expensive  Great pictures informative text.  This was my photographic companion to the Bon book, my first field guide, when at home, with fungi to ID, I would use the photographs from this book and compare them  with illustrations in the Bon book. 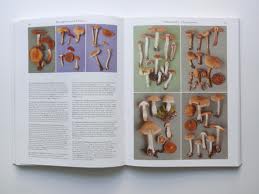 Phillips R, – (2006) – Mushrooms – Macmillan 384pp. Photographs.  In Print.  The resized and updated version of the above book.  More species added including the rather curious addition of American species.  I’m not sure that was entirely neccessary. Confusing for the beginner. 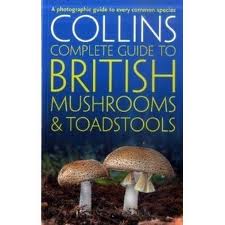 Kibby, G. & Evans, S.  (2004) The first and only two books recommended in this list are by active field mycologists (Unsure about Stefan Bucszaki, although he was once president of the mycological society)   The authors of this book cannot come more highly recommended, Geoffrey Kibby, very much an active Field Mycologist, has been studying larger fungi for close to 40 years making him one of the countries top Field Mycologists.   Shelley Evans, also a very good Field Mycologist is a previous conservation officer for the British Mycological Society.  It is not a book I have used but with these two guys involved it will be of some quality. 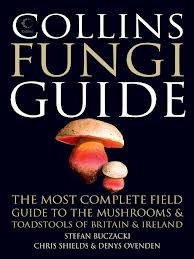 Bucszaki, S. (2012)  Collins Fungi Guide: The most complete field guide to the mushrooms and toadstools of Britain & Ireland:(Collins Guide) 640 p.p. Illustrations.  A long awaited publication, that boasts 2,400 species of fungi, illustrated by two artists.  This book has drawn criticism from the Field Mycologist community due to the following facts, some wrongly named illustrations,  illustrations varying in quality throughout the book and navigation is confusing in parts, especially to the beginner.  My big critique of the book is that it doesn’t mention colours in the cap descriptions, one  has to go by the illustrations for this, which in some cases are incorrect.  In a perfect world we would love all of these things to be as we would like them, in this case they are not, it has the feel of something rushed through.  Given the time it has taken to get here, a few more months wouldn’t have gone amiss to get it right.  However, it is still a major accomplishment, with so many species covered among which many illustrations are perfectly observed, the Ink Caps are wonderful.  There are some amongst us that are asking why we are moaning and that we should applaud such an effort, I couldn’t agree more but can you imagine how much better the book would have been and the plaudits it would have received had they actually got it right?  The days are gone when we would put up with this because of a shortage of decent Field Guides, things have moved on and expectations are higher and this was a long awaited publication. 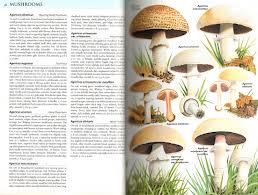 Inside the book here are  illustrations of Agaricus species, examples of the more excellent quality to be had within the book.