During November 2008 I was invited by my good friends, Carolyn and Michael Naish to visit with them La Cevennes a mountainous region in the South of France, 80km north of Montpellier, reaching at its highest peak, 1702 meters above sea level.  La Cevennes was designated a national park in 1970 and it is one of only two such parks in France that has people living and working within it.  The park is clothed in evergreen and deciduous trees such as, Cyprus, Atlantic Cedar, Scots Pine, Evergreen & Deciduous Oak and Sweet Chestnut.  Sweet Chestnut was farmed in this region for many years but has now been left to age and in many areas replaced with Beech trees, which were originally removed to make place for the Chestnut trees.

Slightly north of the town of Le Vigan, Mont Aigoual rises to 1567 meters and forms part of the watershed between the Mediterranean Sea and Atlantic Ocean where it can reach up to 2250 mm of rainfall, that’s seven feet, making it the wettest place in France.

I was based in a small area known as Le Gasquet, the closest town to here being Le Vegan.  I had arrived during a fortuitous period for fungi as it had been raining for 10 days non-stop prior to my visit.  According to my hosts and local field mycologists, October had been very dry and this was the first prolonged period of rain for some time.

Carolyn and Michael had bought a ‘summer house’ and they thought I’d be interested in the checking out the local fungi.  Friends of theirs had been residing in the area for some while and it was with them that we stayed.  I was up early the morning after our arrival, scouting the woods next to the house, it was alive with larger fungi of all kinds.  Two of the most exciting of the species on display were the bright yellow Ramaria largentii and the formidable Tricholoma caligatum two species that I had never seen before.  Tricholoma caligatum is commonly known as the European Matsutake, a mushroom with a price on its head, if any of the restaurateurs down in the town had caught wind of my find, well……………………

During dinner that night I had heated discussions with a local fungi enthusiast who tried to convince me that what I had found was a Cortinarius of some kind but I had already made my mind up, this was obviously not a Cortinarius and could only be Tricholoma caligatum with its perfumed smell, partial ring and robust nature.  Eventually he agreed with me.   But just in that small wooded area beside the house were different species of Cortinarius, Ramaria botrytis, Clitocybe odora, Leucopaxillus amara, Agarius sp, Mycena pura, Lepista nuda and more.

Another area visited was a Limestone Plateau known as the Causse Majean, a small part of a bigger area known as the Grands Causses System, a large open, rocky expanse.  We just pulled over in the car and surveyed a small area with scattered spruce and pine, here we found, Lactarius sanguifluus, Chroogomphus rutilans, Suillus granulatus, Hygrophorus eberneus, Tricholoma terreum and Tricholoma batschii.

We then drove on to another of their friends, in the lowlands and further south.  This was an area dominated by Holm Oak on Limestone and here I came across a large number of Cortinarius belong to the sub-section Phlegmacium.  With Cortinarius not being my strong point I found it difficult to name any of the species encountered apart from one, the bi-coloured C. rufoolivaceus a quite stunning looking species.  Other species recorded were Clitocybe alexandrii and Leccinum lepidum both new records for me.  Suillus bovinus and S. granulatus were also seen, as was another bright yellow Ramaria most likely R. flava as this species not as bright as the previous record with also longer branches and more defined tips.  I found out that this species is locally known as ‘Chickens Comb’. 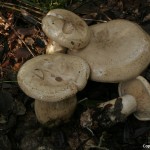 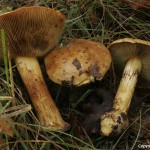 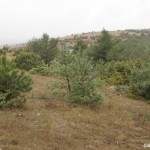 Limestone Plateau with spruce and pine. 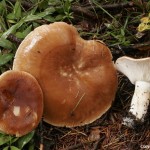 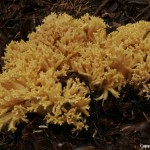 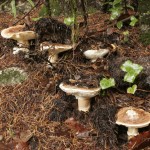 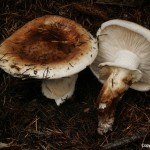 The European Matsutake, an annulate-peronate, highly sought after edible fungus, with a rather perfumed smell and taste. It associates with various Pine trees.