The following images were taken as a result of two visits to the island in 2009 and 2012. My good friend Michael Loizides founder of the Cyprus Mycological Association introduced me to the Troodos mountains and the Cypriot Cistus Maquis. Here are some words from Michael on the Cypriot natural history and geography, extracted from Field Mycology.

For its size, Cyprus has one of the richest floras in Europe, providing home to nearly 2,000 species of plants, (at least as many as are native to Britain) of which 140 are unique to the island. With a total area of 9,251 sq. km, it lies at the easternmost point of the Mediterranean basin, right at the meeting point of three continents: Europe to the west, Asia to the east and Africa to the south. The two mountain ranges, those of Troodos and Pentadactylos, are the predominant physiographical features, the former rising all the way to subalpine level at an impressive 1,952 metres and playing a crucial part in the island’s ecosystem. The forests, though predominantly of pine, also include oak, cedar, juniper, cypress, Strawberry trees, Terebinth, Cotoneaster and Whitebeam. Streams and rivers feature the imposing Oriental Plane tree, together with alder, willow, oak, poplar and elm, while the lowlands are typically dominated by Olive, Carob and scrub. (Loizides, M-Field Mycology Volume 9, Issue 3, July 2008, Pages 107-109.

Despite being significantly affected by human activity, Mediterranean habitats are considered hotspots for life and harbour a great diversity of endemic plants, dominated by woody, evergreen shrubs with small, thick, waxy leaves (sclerophyllous), specifically adapted to retain moisture. Typical of such habitats are the plants of the genus Cistus (rockrose), including 20 or so species, as well as several subspecies, varieties and hybrids. The Cistus maquis, known as ‘jarales’ in Spain, ‘macchia’ in Italy and ‘frygana’ in Greece and Cyprus (Fig. 2), are mycological goldmines: more than 300 species of macrofungi are associated with Cistus, at least 35 of which appear to be host-specific. Field Mycology, Volume 12, Issue 1, January 2011, Pages 14-22
Michael Loizides, Thomas Kyriakou.

Select one of the images below to open the gallery. 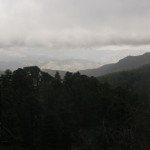 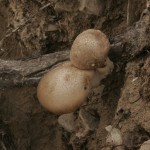 Pleurotus eryngii var. ferulae. This species parasitises Wild Fennel alongside the main roads of Southern Cyprus, it is collected by locals as a food and income source. 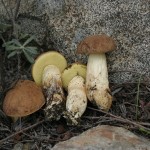 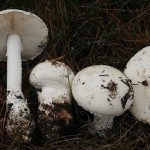 Amanita ovoidea-A large species this, reaching up to 20cm across, very rare in the UK with only one known site on the Isle of Wight. Here it was associating with either Pine or Quercus alnifolia. 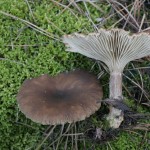 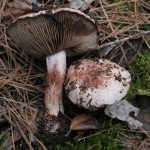 As with so many of the genus Cortinarius, Cortinarius rufoolivaceus, although it may not look so here (take my word for it) is a beautiful looking species with its mix of red brown and olive green. 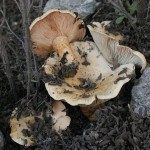 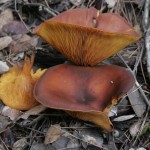 Omphalotus olearius – The Jack ‘O’ Lantern is bio-luminescent and toxic.